Study Reveals Five Common Themes Underlie Most Divorces
Want great marriage advice? Ask a divorced person.
People who lose the most important relationship of their life tend to spend some time thinking about what went wrong. If they are at all self-reflective, this means they will acknowledge their own mistakes, not just their ex's blunders. And if they want to be lucky in love next time, they'll try to learn from these mistakes.
Research shows that most divorced people identify the same top five regrets—behaviors they believe contributed to their marriage's demise and that they resolve to change next time. "Divorced individuals who step back and say, 'This is what I've done wrong and this is what I will change,' have something powerful to teach others," says Terri Orbuch, a psychologist, research professor at the University of Michigan's Institute for Social Research and author of the new book "Finding Love Again: 6 Simple Steps to a New and Happy Relationship." "This is marriage advice learned the hard way," she says

Dr. Orbuch has been conducting a longitudinal study, funded by the National Institutes of Health, collecting data periodically from 373 same-race couples who were between the ages of 25 and 37 and in their first year of marriage in 1986, the year the study began. Over the continuing study's 25 years so far, 46% of the couples divorced—a rate in line with the Census and other national data. Dr. Orbuch followed many of the divorced individuals into new relationships and asked 210 of them what they had learned from their mistakes. (Of these 210, 71% found new partners, including 44% who remarried.) This is their hard-earned advice.

The divorced individuals didn't specifically identify sex as something they would have approached differently, although Dr. Orbuch says it is certainly one aspect of demonstrating love and affection.
Men seem to need nonsexual affirmation even more than women do, Dr. Orbuch says. In her study, when the husband reported that his wife didn't show love and affection, the couple was almost twice as likely to divorce as when the man said he felt cared for and appreciated. The reverse didn't hold true, though. Couples where women felt a lack of affection weren't more likely to divorce.
Do something to demonstrate that your partner is noticed and appreciated every single day, Dr. Orbuch says. It can be as small as saying, "I love you," or "You're a great parent." It can be an action rather than words: Turn on the coffee pot in the morning. Bring in the paper. Warm up the car. Make a favorite dessert. Give a hug. 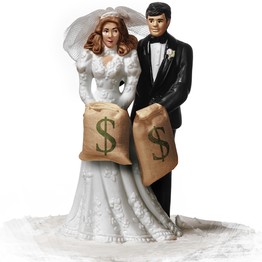 Photo Illustrations by Stephen Webster
Money was the No. 1 point of conflict in the majority of marriages, good or bad, that Dr. Orbuch studied. And 49% of divorced people from her study said they fought so much over money with their spouse—whether it was different spending styles, lies about spending, one person making more money and trying to control the other—that they anticipate money will be a problem in their next relationship, too.
There isn't a single financial fix for all couples. Dr. Orbuch says each person needs to examine his or her own approach to money. What did money mean when you were growing up? How do you approach spending and saving now? What are your financial goals?
Partners need to discuss their individual money styles and devise a plan they both can live with. They might decide to pool their money, or keep separate accounts. They might want a joint account for family expenses. In the study, six out of 10 divorced individuals who began a new relationship chose not to combine finances.
"Talk money more often—not just when it's tax time, when you have high debt, when bills come along," Dr. Orbuch says. Set ground rules and expectations and stick to them.